Q. Does the government see there’s a problem?

A. No. The biggest problem is the inability to admit mistakes and problems. Xi [President Xi Jinping] just claimed in late September at the Central Ethnic Work Conference that current policies are correct and ethnic relations are basically harmonious. This is consistent with almost every statement issued by the Chinese Communist Party. But across the globe there are ethnic problems and you first have to admit it. Only by admitting shortcomings can you talk about them and seek solutions. But in China you don’t get to first base. No one talks about it.

But the party does do a good job in putting on the screws.

Q.Will this lead to an explosion?
A. I don’t buy the pressure-cooker theory.
Q.Why?
A. Simply because the numbers are too small and the problem is too remote. Falun Gong [a banned spiritual movement] or house churches are far more serious, because here we are talking about large numbers in the Han core.

Also, the party has thrown heaps of money into buying a kind of acquiescence among a large number of ethnic minorities. Why risk your life? Some who are radicalized or marginalized enough might do it, but most simply get on with their lives — resentful, perhaps, but also resigned to the fact they are part of China.
Although it’s difficult to work out for sure, as few are willing to talk. Ethnic issues are so sensitive. It’s hard to get people to open up.

Q.Is this what you found during your recent trip to Xinjiang?
A. Yes. Things are particularly tense in Hotan [a town in southwestern Xinjiang]. It’s an odd outpost of Han-built modernity — very industrial and little character. There were about 100 Han dancing in the main public square, protected by soldiers — a lot of them with dogs, too. The soldiers had machine-guns and these truncheons with spike-like endings. To get in there, you have to pass a checkpoint.

It was a weird scene: Han civilians being protected by Han soldiers in a city that is nearly 90 percent Uighur. I took a few photos and the People’s Armed Police guys got on their walkie-talkies. When I tried to leave, about five of them surrounded me and took me to a police officer. They couldn’t believe I wasn’t a journalist. One minute they were telling me how dangerous it was here, and that I should know better. Yet when I said I was there as a tourist, they were like: “Right … OK … of course, we welcome tourists. It’s an open city. Welcome to Hotan city!”

But they weren’t happy I took the photos and wanted to delete them.

Q.They’re worried.
A.Yes, but their policies are so reactive. We’ve had high-profile attacks in Beijing, Kunming and Urumqi since Xi came to power. These have been highly embarrassing. But they don’t have a proactive stance, because they don’t have a solution. They aren’t willing to think outside the box about new approaches that might be more productive.

The more I think about it, the more I think it’s one of those problems that doesn’t seem to have a solution. I hate to sound pessimistic, but that’s how it seems with the current regime in place. 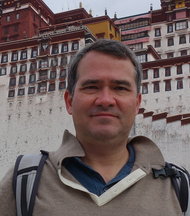 More in the New York Times.

Ian Johnson is a speaker at the China speakers Bureau. Do you need him at your meeting or conference? Do get in touch or fill in our speakers´request form.