Despite the nasty twist the blind activist Chen Guangcheng‘s stay at NYU got, his flight from China to the US was still a turning point, writes author and his long-term friend Zhang Lijia from Beijing in  medium.com.

Whatever happens in the wake of the NYU debacle, he describes the past year as the “turning point” in his life. “From living in an authoritarian society to a democratic one; from a prisoner to a free man: Can you imagine a more dramatic shift?” he asks.

A dramatic shift, and dramatic changes. He has never before met with so many people from different walks of life or such a variety of organizations; he has never traveled so intensively or visited so many countries — six so far — and neither has he ever received so many invitations for interviews, speeches, and appearances.

He also has never sampled so many diverse cuisines: He makes a conscious effort to not just eat Chinese food. He still can’t stomach cheese, but he has become fond of other Asian cuisines, especially Thai. Once, a Jewish friend of mine took him to a kosher restaurant in New York. Chen commented that the beef in his pastrami sandwich, which he enjoyed, tasted very much like soy sauce beef.

The best change of all is that now he can work.

Chen keeps in touch with rights groups in China via Internet and phone, and advises individuals about how to approach their cases and where to find lawyers. “I don’t think the distance between China and the U.S. poses as a great obstacle, thanks to modern technology,” he says.

So, what next? After leaving NYU, Chen is planning to set up a foundation aimed at pushing for democracy and the rule of law in China. 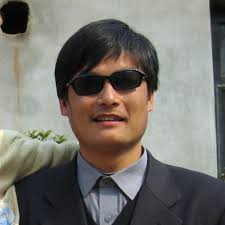 Apart from providing legal consultation to those in need of it in China, he hopes to work with international organizations, because, he says, even democratic countries sometimes place trade over human rights.

These are still the early days and the challenges remain: Chen will have to reinvent himself, improve his English, emerge into mainstream American society, and navigate the unfamiliar American political landscape — which can be treacherous. In the long run, it may be his resolve that keeps him in the game and allows him to create the meaningful changes he desires.

Steve Barru and Fons Tuinstra discussed in the China Weekly Hangout of April 4 what they expect from the political change in the upcoming ten years under Xi Jinping; agenda: Hu Jintao, austerity, poor-rich divide, and more.

The upcoming cyber war is the subject of the +China Weekly Hangout on Thursday 27 June. The revelations by Edward Snowden showed that the US is preparing a military shake-out, as both China, Russia and other countries are building up their cyber war capacities too. Joining us are former security consultant +Mathew Hoover and media en communication lecturer +Paul Fox of the Hong Kong University. Moderation by +Fons Tuinstra, president of the China Speakers Bureau.