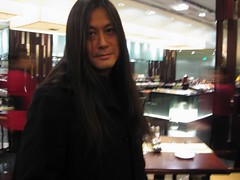 Smart Beijing sat down with “Baidu International Communications Director/Sinica podcast co-founder/pioneering Beijing longhair” Kaiser Kuo, and asked him about life and music in China’s capital Beijing. About Cui Jian, the Black Panther and much more.

SmBj: Is there any overlap between your current professional life and your previous time in the rock scene? I’m sure people you interact with professionally must know…

KK: Yeah, everybody knows. There’s basically no overlap at all. The only overlap is that I have a personal mission. Whether I like or don’t like the work that I’m doing or the thing that I’m involved in, I feel like I’m fulfilling that personal mission, which is to build people-to-people bridges between the Anglophone world and China. Try to encourage a little bit of fucking empathy where there’s sadly little these days. I’m absolutely doing that right now with my Baidu gig. I was certainly doing that with Tang Dynasty and Chun Qiu. I probably wasn’t doing that while I was at Ogilvy, and that’s probably why I wasn’t very happy there. That’s the only place that the two worlds really touch one another. It isn’t a similar skillset, exactly. I’m always gonna play music in some capacity. It’s a great outlet, it’s a great way to burn off whatever creative juices that aren’t easily directed into whatever day job stuff. Baidu is very demanding, I can’t keep too many balls in the air at the same time. I have this podcast that I do, and that actually does have a little more relationship to work, because I need to keep current. It’s not a bad thing for my job for me to be in a room with leading journalists every week. But music’s increasingly difficult to fit in. Family has to take precedence. So even musical outlets there… I spend more time sitting at the piano with my children or teaching my daughter to play guitar. We’re a long way from being able to jam together, but she’s into it. [My son] likes really hard stuff, he likes stuff that makes him bang his head. He likes Lamb of God and Slayer and stuff that’s just super aggressive. And he also likes early ’90s vintage gangster hip hop stuff, like NWA. Anything that sounds super aggressive. He’s overflowing with testosterone already at [age] six. He definitely likes metal. They’ve discovered Baidu music, and I make little playlists for them.

Much more in Smart Beijing.

Kaiser Kuo is a speaker at the China Speakers Bureau. Do you need him at your meeting or conference? Do get in touch or fill in our speakers’ request form.
Kaiser Kuo and Tang Dynasty playing “Taiyang”