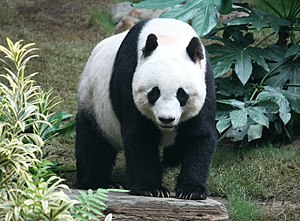 Panda in Hong Kong via Wikipedia

What’s the point of breeding panda’s, author Zhang Lijia wonders on her weblog after a couple arrived in a highly-publicized visit in Edinburgh. Panda’s as political tools have been replaced by a commercial, and useless, breeding program.

Which brings us back to Edinburgh zoo, where a group of scientists will research how to introduce captive-born pandas into the wild. Professor Lu Zhi, a panda expert from Beijing University, has said the expensive exercise is as “pointless as taking off the pants in order to fart”, and urged that the money be spent on conservation.

She says she doesn’t oppose commercial deals. “Tian Tian and Yang Guang are rather like migrant workers, leaving their village for the city. If the pandas knew how to calculate, they’d agree themselves, to earn lots of money to help to preserve themselves.”

But she fears that the profit will go straight to the breeding programmes, which will produce more “un-authentic” pandas. The biggest difference between wild and bred pandas is the very low sex drive of the latter: in the wild, for much longer than human history, the animal has managed to reproduce, without any human assistance, sex videos or any mate-swapping tricks.

The long-term solution is to guarantee pandas’ natural habitat. While I don’t question our government’s determination to protect the species, it’s worth pointing out that railways and main roads are still being built too close to conservancy areas, or sometimes even through them. There has been little growth of the wild giant panda population, which is now estimated at 2,000. Without a vigorous conservation policy, the pandas will remain an exotic diplomatic tool or money-making tree.

More on Zhang Lijia and China’s moral crisis on Storify.