Mark Obama Ndesandjo, the half brother of US president Obama, was in Shanghai this week to sign copies of the Chinese edition of his autobiographical novel ‘Nairobi To Shenzhen: A Novel of Love in the East‘

The half-brother of U.S. President Barack Obama attended a book fair in Shanghai Wednesday to promote his semi-autobiographical novel “Nairobi to Shenzhen” and to autograph its Chinese edition for the readers.

Mark Obama Ndesandjo’s novel, written in diary form, is based on his own experiences: born in Kenya, working in the United States and moving to Asia after his American dream was smashed by 9/11.

Ndesandjo moved to Shenzhen, a boomtown in south China’s Guangdong Province just across the border from Hong Kong, in 2001. He has taught English and been heavily involved in charity work, including giving free piano lessons to orphans.

The Chinese edition of his “Nairobi to Shenzhen” features photos of his life in China: spending time with orphans, discussing traditional culture with ethnic Naxi people in Lijiang, a scenic town in the southwestern Yunnan Province, and practising Chinese calligraphy at home.

Ndesandjo said he loves China and its traditional culture. He has passed advanced Chinese tests and published three 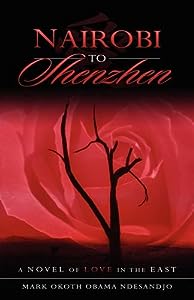 albums of his piano performances.

Mark Obama Ndesandjo is a speaker at the China Speakers Bureau. Do you need him at your meeting or conference? Do get in touch.