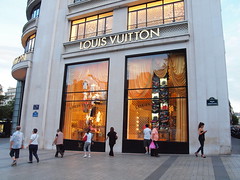 “Louis Vuitton consumers are very interested in buying a brand with long-term heritage… and I think that’s why Louis Vuitton is very smart to partner with the museum,” Rein told AFP…

“Right now Louis Vuitton is the dominant player but they are going to have massive problems in the coming five years” as people start to buy their second or third luxury handbag, said Rein.

Shaun Rein is a speaker at the China Speakers Bureau. Do you need him at your meeting of conference? Do get in touch.