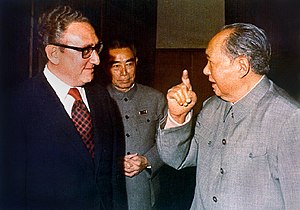 Former foreign correspondent Jasper Becker wonders in a review in The Guardian why in 600 pages Henry Kissinger‘s ‘On China’ did not answer the most important issue at stake: why did Richard Nixon decide it was in the interest of the US to protect communist China?

Kissinger tells us that this de facto alliance was personally decided by Nixon in August 1969 just as the Soviet Union was preparing to launch a pre-emptive nuclear attack on China. Nixon had decided the Soviets were the more dangerous party and that it was against American interests for China to be “smashed” in a Chinese-Soviet war. “It was a revolutionary moment in US foreign policy,” Kissinger explains. “An American president declared we had a strategic interest in the survival of a major communist country.”…

The alliance is as crucial to understanding world history as Britain and America’s decision to make an ally of Stalin in order to defeat Hitler, rather than the other way round, the result of which was the establishment of a Soviet empire in Europe rather than a German one….

Kissinger implies that only a clever diplomat such as himself can catch the sophistication of the Chinese people and their “subtle sense of the intangible”. So in this book Chinese leaders never sound unreasonable, but always sensible and pragmatic, unlike the Americans, who make unreasonable demands and have confused ideas about democracy and human rights.

Kissinger has no curiosity at all: he never looks behind the curtain, let alone listens to spokesmen of the Chinese opposition. Even after Tiananmen, when the dissident physicist Fang Lizhi was holed up for 18 months in the US embassy and the subject of high-level bargaining, Kissinger didn’t bother to meet him. It’s a pity that Kissinger was never distracted from his mission to achieve “a rebalancing of the global equilibrium”. The world might have been quite a different place.

The complete story you can find at The Guardian.

Jasper Becker is a speaker at the China Speakers Bureau. When you need him at your meeting or conference, do