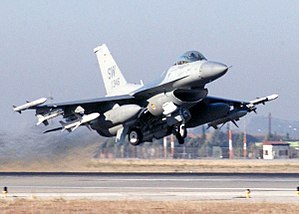 Taiwan is getting frustrated over a US fighter deal as Washington does not want to upset China, or lose the weapons in case of a reunion, writes Wendell Minnick in Defense News.

Taiwan’s request for 66 F-16C/D Block 50/52 fighters for $5.5 billion and for an upgrade package for 146 F-16A/B Block 20 fighters for $4.5 billion has been on hold since 2007 and 2009, respectively.There is also intense debate within the U.S. government as to whether the programs should include the active electronically scanned array radar, which some in Washington fear could end up in Chinese hands if Taiwan reunifies with the mainland. The alternative is the older APG-68 mechanical radar.

Taiwan also faces hurdles over an engine replacement with some in Taiwan’s defense community suggesting that the current Pratt&Whitney F-100-PW220 engines be rebuilt, rather than replaced, due to budget concerns.

Wendell Minnick is a speaker at the China Speakers Bureau. When you need him at your meeting or conference, do get in touch.