Mattel got carried away with Barbie story – Paul French 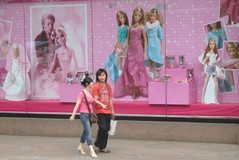 Image by Zingaro. I am a gipsy too. via Flickr

The sudden closure of Mattel‘s Barbie store in Shanghai seems to have nobody apart from Mattel, says retail analyst Paul French in the LA Times, today. He is sceptical about the firm’s announcement they are merely changing plans.
The closure comes after other high-profile closures of retailers like BestBuy and Home Deposit.
The LA Times:

Paul French, the Shanghai-based founder of retail market-research company Access Asia, said Monday he was skeptical that the closure was planned.
“What’s better than a [successful] flagship store in Shanghai?” he said.
Instead, French said, Mattel probably overestimated its cachet in China and assumed Chinese women would embrace childish brands the way many women in Japan do with Hello Kitty and, well, Barbie.
“They got massively carried away with that store,” French said. “Retail is all about square footage and I never saw enough people there to justify its size. The rent there would have been big.”

Paul French is a speaker at the China Speakers Bureau. Do you need him at your meeting or conference? Do get in touch.