Taiwan’s missiles "no message for China or US" – Wendell Minnick 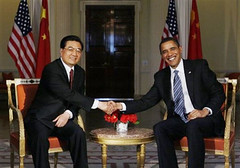 No message for them by rebuildingdemocracy

Taiwan test-fired missiles of 11 different types during an exercise on Jan. 18 at the Jiupeng Missile Test Range in Pingtung County on Taiwan’s southeast coast. The tests coincided with Hu’s visit to Washington to meet with U.S. President Barack Obama.

A Taiwan military official denied the tests were an attempt to send a political message to Beijing or Washington. He said the tests were scheduled long before the announcement of Hu’s visit.

There was a political message, Minnick write, but only for domestic use, after the J-20 fighter test flight in China. Unfortunately, that message misfired, as many of the missiles did not hit target:

Taiwan President Ma Ying-jeou expressed disappointment and called for the military to better prepare itself in the future. A Taiwan military official expressed concern over Ma’s remarks and described the test as a complex exercise involving different elements of the Air Force, Army and Marine Corps from around the island.

The tests were a rare event that included virtually every air-to-air and surface-to-air missile in Taiwan’s arsenal minus the AIM-120 AMRAAM and Patriot PAC-2 missile systems, said another military official. The last public missile test at Jiupeng was in 2002 and was of a much smaller scale, he said.

Wendell Minnick is a speaker at the China Speakers Bureau. When you need him at your meeting or conference, do get in touch.