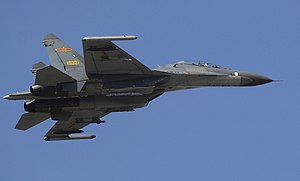 Not only for space via Wikipedia

A supersonic combat aircraft is next on the wishlist of China’s aviation industry, defense specialist Wendell Minnick writes in Defense News. China is looking for a new bomber in the 21th century, meaning also militarizing space.

Revealed at the recent 8th China International Aviation and Aerospace Exhibition (2010 Zhuhai Airshow), the winners of the 4th National Future Aircraft Design Competition were the Merlin fighter-bomber, SkyNet airship, Wolf Rider unmanned combat aircraft and the Shadow Dragon unmanned bomber. Though the four design concepts are well beyond China’s technical capabilities and “smack of science fiction fantasy,” all four represent a real effort on the part of the People’s Liberation Army to militarize space, said Ian Easton, a specialist in Chinese aeronautics at the Washington-based Project 2049 Institute.

More information on the different models (including pictures) at Wendell Minnick’s weblog.

Commercial
Wendell Minnick is a speaker at the China Speakers Bureau. Do you need him at your meeting or conference? Do get in touch.