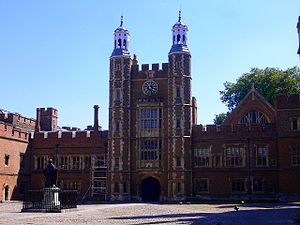 No Chinese Eton yet via Wikipedia

Whether China is going to be a superpower has less to do with its military might, but more with its ability to reform its archaic education system, argues Shaun Rein in Forbes. Chinese parents often worry their children do not get the best possible education and send them abroad.
Shaun Rein:

To cement its superpower status, China needs to improve its educational system so it doesn’t just produce great academic research and innovation but also attracts the world’s top students. All great powers draw in the world’s best and train the future leaders of their allies and vassal states. That is soft power at its finest. The British have had Eton and Oxford, the U.S. St. Paul’s and Harvard. China needs its own global centers of learning.

China’s educational system at present causes its best and brightest to move abroad for their studies. Several hundred thousand Chinese study abroad every year, 128,000 in the U.S. alone this year. Nearly 20% of the non-European Union international students in the United Kingdom are Chinese. When I was a graduate student at Harvard’s Graduate School of Arts and Sciences a decade ago I had more classmates from China than from any other nation except the U.S.

Onlye when the best and the brightest come to China to study, the country is ready for a great future, Rein argues.

Young foreigners often fall in love with the country and want to stay there or bring positive experiences home with them. They should be allowed to work in China, if only to build soft power. Their presence in offices also helps local workers. They do not take jobs away from Chinese. Under the current system, I wouldn’t have been allowed to stay in China and work after I completed my education.

Commercial
Shaun Rein is a speaker at the China Speakers Bureau. When you need him at your meeting or conference, do get in touch.