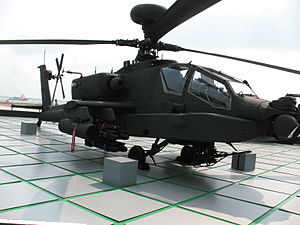 The wrong helicopter via Wikipedia

Taiwan’s decision to purchase 31 AH-64D Apache Longbow attack helicopters for US$ 2.5 bn in stead of Cobras is blasted in an article in Atimes, as it does not fit any of the island’s defense strategies. Defense expert Wendell Minnick explains why the decision is odd, to say the least.

“Taiwan has a high mountainous interior with low salty coastlands. Neither are friendly to Apaches,” said Wendell Minnick, Asia bureau chief for Defense News, in an interview with Asia Times Online. “Taiwan wanted Apaches largely because they are the latest, most technologically advanced piece of equipment in the US arsenal, but it’s the Cobras, which are popular with the US Marine Corps, that can handle the types of environments found in Taiwan with ease.”

The AH-1W Super Cobras Minnick recommends are the backbone of the US Marine Corps’ attack helicopter fleet. Over the next decade, they will be replaced by the AH-1Z Viper upgrade, which is widely called “Zulu Cobra” in reference to its variant letter. The marines placed orders for more than 400 AH-1Zs, and one of the things that makes the Zulu Cobra especially suitable for a military that fights in proximity of seashores is that its rotor blades come with a semi-automatic folding design, which allows the helicopter to be stored aboard amphibious assault ships. The Longbow radar that gives the AH-64D Apache Longbow its name can also be mounted, along with the same missiles and rockets as the Apache.

Neither from a military nor an economic point of view does Minnick see why Taiwan would choose the Apaches over the Cobras. “Taiwan already has two squadrons of AH-1W Super Cobra attack helicopters. It was given an option to procure 30 new Zulu Cobras and was offered an upgrade of their older Super Cobras up to Zulu standards. That would have given them 90 AH-1Z heavy attack helicopters in their inventory. But instead they chose Apaches.”

Wendell Minnick is a speaker at the China Speakers Bureau. When you need him at your conference or meeting, do get in touch.