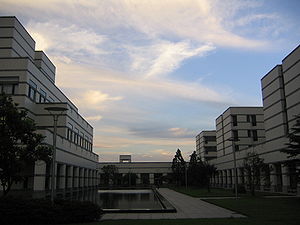 CEIBS in Shanghai via Wikipedia

China’s economy needs a slow-down to repair its engines, says CEIBS economist Wang Jianmao in IPSnews, to get its three engines fixed, consumption, investments and export. “The government is too much focused on speed.”

There are different economic engines, like exports, investments and consumption. “The vital engine of consumption, however, is not working in China. If we delay repair the other two will stop at the same time. Not a single country can sustain growth when its economy keeps growing with double- digits.”

More than 50 Chinese companies have now entered the Fortune-500 list, but that is not necessarily good news, the economist says:

“That doesn’t mean they are productive”, says Wang. “They have had access to unlimited amounts of cheap money. The interest rate for them has been lower than inflation. They keep on investing up to the point of serious overcapacity, which has a negative effect on both the returns and the prices. In other words, they waste people’s money.”

Big profits without adding value and creating jobs is a bad strategy for a country that urgently needs more consumer spending, says Wang. “Labour income as a share of gross domestic product has been declining for years. Instead of supporting capital-intensive industries, we need small and medium enterprises, in order to create labour-intensive jobs, up the value chain. We have the world’s largest market for luxury cars, but at the same time too many people earn just the minimum wage.”

Commercial
Wang Jianmao is a speaker at the China Speakers Bureau. When you need him at your meeting or conference, do get in touch.