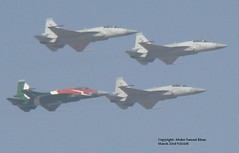 China’s military industry is pushing its fighter jet JF-17/FC-1 on a global market, and apparently so successful its Russian competitor is trying to block it, writes Wendell Minnick this week in Defense News.The director general Pogosyanof the Russian Aircraft Corp. (RAC) MiG has been trying to stop delivering flight engines to his Chinese competitor.

“I am not against the export of separate technologies, but it should be agreed with those who make final products that such export would not harm them,” Pogosyan told the Russian business daily newspaper Kommersant on July 6.

Pogosyan fears the single-engine JF-17, which costs up to $20 million per copy, could undercut sales of the $30 million, twin-engine MiG-29 Fulcrum…

China plans to show two JF-17s at the Farnborough International Airshow later this month – the planes’ debut at international defense exhibitions – in hopes of drumming up export sales.

Commercial
Are you interested in more background about China’s emergence as a military power? Wendell

Minnick is a speaker at the China Speakers Bureau. Do get in touch if you want him at your meeting or conference.