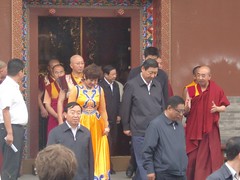 Upcoming leader Xi Jinping was to many’s surprise not elected as Vice-president into the Central Military Commission (CMC), a step needed to replace current president Hu Jintao in 2013. Political analyst Victor Shih explains in Bloomberg Hu wants to hang on a little big longer after 2013, just like his predecessors did.
Bloomberg:

Xi may still be named to the post in coming days or weeks or at a party meeting next year. Should he fail to be appointed, it may be a signal that Hu wants to hold on to his role as the commission’s chairman beyond 2013, delaying Xi’s full assumption of power, said Victor Shih, a professor at Northwestern University in Evanston, Illinois who studies elite Chinese politics.

“For now, Xi accepts his exclusion from the CMC,” Shih said.

Victor Shih by Fantake via Flickr
Victor Shih is one of few people with real insight of what is happening behind the curtains at Zhongnanhai. When you need him at your meeting or conference, do get in touch with the China Speakers  Bureau.