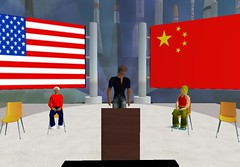 The relations between the Obama administration and China’s central government have been excellent, despite an averted trade war. But on the internet US and Chinese citizens are stirring up the Sino-US relations, warned Kaiser Kuo earlier this week at a CLSA China conference in Shanghai, here quoted in Business Week

He said the internet is leading to increasing polarization of views between China and the U.S. in what he describes as “Red necks vs Red Guards.” Ironically, he notes that Sino-U.S. relations since Obama took office have been better than in any time in recent memory. But while things look smooth offline, online “things have deteriorated really, really badly.”

This matters because the Chinese leadership is becoming increasingly sensitive to views disseminated in chat rooms and blogs within China, and popular opinion is, for the first time in the Middle Kingdom becoming something Beijing is wary of. “It is not just in western democracies where populism is percolating up to national policies,” he said. “Unchecked this will strain the political relationship [between the U.S. and China] and constrain policy choices.” The internet is making us “more tribal, more fractured, more polarized…..people are touching noses but not seeing eye-to-eye in Cyberspace.”

He proposed several ways that western readers might help close this chasm of opinions. First, they should drop their condescending attitudes that assume because the Chinese are caught beyond the Great Firewall that they are to be pitied. Second, try to learn what the Chinese think when they aren’t on the defensive. Third, learn some Chinese history, especially from the last 150 years. And finally, take advantage of bridge bloggers who monitor the Chinese internet and provide a summary for non-Chinese speaking readers.

Kaiser Kuo is a speaker at the China Speakers Bureau. Do you need him at your conference or meeting? Do get in touch.