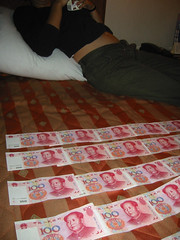 With the US dollar in decline as the leading global currency, the financial world is looking for alternatives. China’s currency, the Renminbi, is not going to be one, writes Arthur Kroeber in the Financial Times. The Renminbi might be expanding its global network, but that does not make it a possible replacement for the US dollar says the Beijing-based economic analyst.

The renminbi will clearly internationalise significantly over the next five to 10 years. Over a longer period (10-20 years) it may emerge as a secondary reserve currency like the Japanese yen, although this is not certain. But for it to replace the dollar as the main global reserve currency, many decades and a combination of improbable events would be needed.

Plenty of currencies internationalise without becoming substantial vehicles for reserve holdings (Swiss franc, Singapore dollar, etc). The renminbi will certainly become far more widely used in many countries because of China’s large role in global trade and the vast numbers of Chinese business and leisure travelers who will trot the globe.

More at the Financial Times.

Arthur Kroeber is also a speaker at the China Speakers Bureau. Do you need him at your conference or meeting? Do let us know.