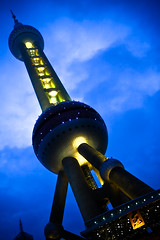 Victor Shih  attended yesterday a China conference of the “Friends of Europe” in Brussels,  together with Levin Zhu, the CEO of the China Investment Corporation (CIC), China’s souverain fund. Shih addressed the danger of China banking literally on its future, by increasing its debts for its economic rescue package. From his notes:

“For most construction projects, the central or local budget provide only 1/4 to 1/3 of the funds. For the remainder, local governments raised money through local investment companies, which either borrowed from banks or issued debt. The total amount of this liability has built up quite quickly in the past few years. For example, in Shanghai, I was able to find from public sources over 300 billion RMB in local investment debt just looking at the past three years. In contrast, Shanghai’s annual revenue in 2008 was only 120 billion RMB. So, debt is already nearly three times that of revenue in Shanghai. The thousands of cities in China are in the same situation. Banks are willing to lend to these entities because it is presumed that the local governments and ultimately the central government would guarantee these loans. Thus, total government deficit should include these liabilities, which would put China’s deficit as a share of GDP at closer to 50-60% instead of the official 20%.”

Victor Shih is a speaker at the China Speakers Bureau . Do you want this expert on China’s
financial and political systems at your conference? Do let us know.