Being a princeling no longer a nono – Victor Shih 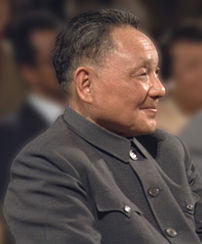 Deng Xiaoping would be upset
via WikipediaFor a long time, and up to not so long ago, making use of your bloodlines was not done for descendants of Communist celebrities, writes Victor Shih at his weblog. But the princelings – as they are called – now make full use of their parents credential, wishing the Chinese happy new year at the front pages of the People’s Daily.

You see interviews with princelings recounting their memories of their fathers displayed prominently on the website. Even Mao Xinyu, the grandson of Chairman Mao (left), is trotted out frequently. The latest item goes too far, I think. First of all, instead of “princelings,” they are now called “red descendants.” Eh, doesn’t that sound a bit like the “blood line theory,” which dominated early Red Guard discourse back in the Cultural Revolution (slogan: father a hero, son good man; father reactionary, son turtle’s egg). These “red descendants” are collectively wishing the Chinese people happy new year. Great! So now it’s officially okay to admit that “red descendants” is a coherent social group, one that is to be admired by the people.

Back in the 1980s those people would have gotten into trouble with former leader Deng Xiaoping and princelings would have to actually hide their connections, writes Shih.

Even Bo Xicheng, Bo Xilai‘s elusive brother, makes an appearance. Look, this looks suspiciously like the princelings’ play at building up more legitimacy for themselves in preparation of Xi Jinping‘s takeover. It is sad to see because Chen Yun and even Xi Zhongxun himself would never have allowed such abuse of these ties in the public discourse. Where is Song Ping when you need him?

Victor Shih
by Fons1 via Flickrs among the speakers at the China Speakers Bureau. If you need him at your conference or meeting, do let us know.