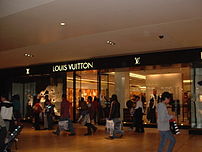 A winner?
via Wikipedia Yes, there is nowadays too much in China anyway, says retail investigator Access Asia Director Paul French. No, says market researcher Shaun Rein of CMR, it is all a matter of having a smart strategy.
Beijing has faced a flood of high-end shopping malls with countless high-end retailers, trying to make the best out of the Beijing Olympics. That was a wrong strategy to start with, says Paul French in the International Herald Tribune.

“There’s just so much of everything in China right now,” said Paul French, founder of the market research firm Access Asia. “It’s hard for a brand to get ahead of the pack.”
Beijing’s high-end retail space expanded by 89 percent in the last two years, according to a report by the real estate services agency Jones Lang LaSalle. And French said too much of that space was built in anticipation of the Games. “Who was going to come to the Olympics and buy a handbag?” he wondered aloud. “It was a dumb strategy.”

In some cases, it is hard to get to the new stores, because of the traffic, making a disaster inevitable. But some have done it the right way, says Shaun Rein in the same article.

“Very few brands will do well because everyone wants to come here,” said Shaun Rein, founder and managing director of China Market Research Group, based in Shanghai. But those that are doing well have a few things in common, he said – for one thing, their stores are “enormous.”
Chinese consumers feel slighted if the store is cramped and not matching the brand image, Rein said.
Another key is to have a broad selection of products at a wide range of prices – for example, handbags for 30,000 yuan, or $4,400, or comparatively cheaper items like key chains for 2,000 to 3,000 yuan. Gucci and Louis Vuitton are standouts in China for these reasons, Rein said.

More at the International Herald Tribune.

Commercial
Getting your strategy right is tough in China’s fast moving economy. At the China Speakers Bureau we have leading authorities on branding and retailing in China, including Paul French and Shaun Rein. If you are interested in having them as a speaker, do get in touch with one of our international offices.