Tips for picking a great speaker (8) 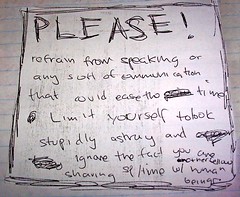 Do not make jokes, is one of the main warnings we give speakers when they have to address an audience that is different from their own background. We are not only talking about addressing Chinese audiences, I have been listening to US speakers and had no clue what they were talking about. Great Chinese speakers, who are unable to catch a foreign audience. Before you address an audience, or invite a speaker, it is very important to explore common ground between the speaker and the audience.
It is not always a problem. I have been attending in Shanghai a great speech of a former Australian football player, Mark Taylor, who made many references to his sport, but he could get it across, even though I had no clue what he was talking about. But you need a truly great story teller to get that done.
The dilemma’s starts at picking a speaker. I was once asked by a chemical company from Europe to find them a speaker able to “turn the heads” as they called it, at a meeting on innovation of a few hundred of their Chinese managers. We got them a shortlist of truly great Chinese speakers, not that easy, since innovation as a subject is still pretty young in China.
An enthusiastic reaction from a Chinese employee involved in organizing the conference confirmed we were on the right track. Unfortunately, her foreign bosses – the real decision makers – disagreed. They had no clue who these Chinese celebrities were.
The opposite happens too. I had to disappoint many celebrity speakers from the rest of the world, eagerly looking for opportunities to speak in China. But when they cross their cultural border, they are suddenly not celebrity anymore. A former anchorman of NBC is a mister nono in Shanghai. I have more than once heard conference organizers telling how they had to ask the hotel where they held their conference to move in their staff, changed into their normal dresses, so the famous management guru had no clue he did not have audience in China. In China, people and companies are willing to pay a lot of money to join the company of Bill Clinton, but there are very few people who would be interested for people who have not a similar status.
And for the non-Chinese, would you be interested in meeting Long Yongtu? Perhaps the name does not ring a bell, but he is a celebrity in China, and brought the country into the World Trade Organization.
Bridging those gaps is a major challenge, not only for the organizers, but also for us as a speakers’ bureau.