Tips on picking a great speaker (3) 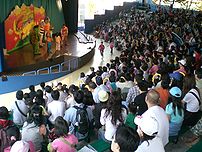 Who is in the audience?
via Wikipedia

Who is in the audience?

First, is the size of the audience. We have done everything between speeches for one thousand and briefings for five, but our speakers do need to know a bit about the size in advance, so they can prepare themselves well.

Who is in the audience? Most of our professional speakers are rather content-driven and – it is an obvious issue – want to know what the audience already knows about or a specific industry. We are dealing sometimes with high-end experts, business executives who are in an event to have their traditional conventions about challenged. The other day we are dealing with an incentive tour, where most of the audience has just figured out where on the map they can find .

All those different audiences need different kind of speakers, panels, formats. Sometimes, especially during business visits, we have to be able to change a program or its settings pretty fast, because changes in those trips do occur rather frequently.

Finding the best match for your event is as serious as dating: both partners have to know each other as good as possible to make it into a success.

A few special guests our speakers would like to know of when they give a presentation. Are there any Chinese officials present. In general, you have to adopt your speech according to the cultural background of the setting, but having official in the room would take some extra measures.
Also, the question whether journalists are presents matters to some of our speakers and, additionally, whether those journalists are based in China or just visiting. While all journalists are able to misquote people, the danger is larger when they are not familiar with China. A small selection of our speakers wants to be sure their viewpoints are off-the-record, meaning that speakers cannot be quoted.
Nowadays everybody can be a journalist and post – even during the session – reports on their weblogs, mailing lists, twitter and other social media tools. It is important that – depending on the insight of an audience – you set the rules of the game clearly before the show starts, if a speakers wants to speak off-the-record.